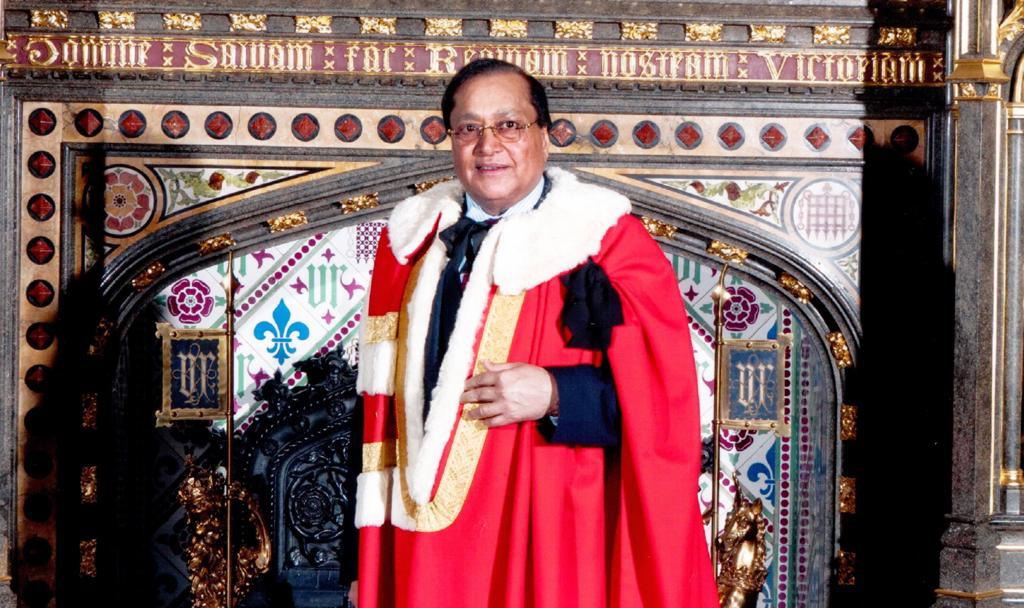 It is a great honour for Lord Rami to be our organisation’s our Chief Patron.  No more appropriate figure could have this very important post as Lord Rami is not only a legendary UK BAME, Indian community businessman, but equally renowned for his work across decades for good causes, building an inclusive multicultural Britain, and for Community.

Lord Rami (Raminder Singh Ranger) was born in pre-partition India at Gujranwala in 1947.  After completing a BA degree at the Government College, Chandigarh, he came to the UK to study Bar at Law in 1971.  Undaunted by the most formidable challenges, Lord Rami soon commenced realisation of his goal of becoming a successful businessman, firstly in the UK, and ultimately on a global level.  He is of Sun Mark Ltd, and of Sea Air & Land Forwarding Ltd. Sun Mark Ltd is the only company to win for five years, consecutively, the Queen’s Awards for Enterprise in International Trade.

Just over a year ago (11th October 2019) he received his peerage for outstanding achievement as perhaps the most renowned UK BAME business leader, and his exceptional services to community and good causes, becoming Baron Ranger of Mayfair (Westminster).

Lord Rami is Chair of Conservative Friends of India, that works for deepening links between the Conservative Party in outreach and support to the UK Indian community, and for enhancing India and Britain links.

The following excerpts from the Smith & Williamson Entrepreneurs Hall of Fame article on Lord Rami reflect well his determination, focus, and view on ingredients for success – in these his guiding values and philosophy of life in which are embedded his passion for fairness, British values and contributing to building further an inclusive multicultural UK shine brightly:

‘… The only job I could get was as a cook at KFC. I was just happy to be employed! I worked very hard. They liked my attitude, the way I worked the till and talked to customers. It wasn’t long until they put me in charge of the Brixton branch. I turned the shop into the no. 1 in the country. The company then promoted me to the role of a district manager, in charge of the operational running of 10 stores with a good salary and company car. I felt like I had struck gold”.

Rami was made redundant after 6 years at KFC and then he went on to join the high street retail chain Dixons Plc as a branch manager at the Cheapside branch. Treated poorly by management, he quickly became disillusioned. They would poach his best staff and move them to different branches, leaving him struggling.  It was the push he needed to set up by himself as a freight forwarder.’

‘ … For Rami, trust is everything. “If people can trust you, then they will do business with you. There are too many short-sighted people, who go to suppliers and say that they want the products for export but sell them locally in the UK for a quick profit. Business is a game of people. Money doesn’t make money, people make money. The bottom line is, my staff are highly motivated, they are looked after and treated well. You can’t achieve much alone. I am indebted to the British sense of tolerance and fair play and as a result, an ordinary immigrant could realise his ambitions and become an asset for his family and adopted country, Britain.”

‘ … Rami has never forgotten how he was helped along the way and now does a lot of charity work to give back to society. He regularly donates to educational institutions, sports clubs, charities such as Combat Stress and Age UK to name a few.

He also gives his time to organisations such as the Prince’s Trust, mentoring disadvantaged youth. “I teach everyone to follow five principles; self-respect, work ethics, commitment, vision and empathy for others. These values have been the key to my success”.

You can read the full article at: https://smithandwilliamson.com/en/solutions/entrepreneurs/entrepreneurs-hall-of-fame/dr-rami-ranger-cbe/

One Community Hampshire and Dorset (OCHD) is a multiple multicultural communities’ group that have been working closely together, and growing in number, for three+ years.

Be the first one to receive latest updates.